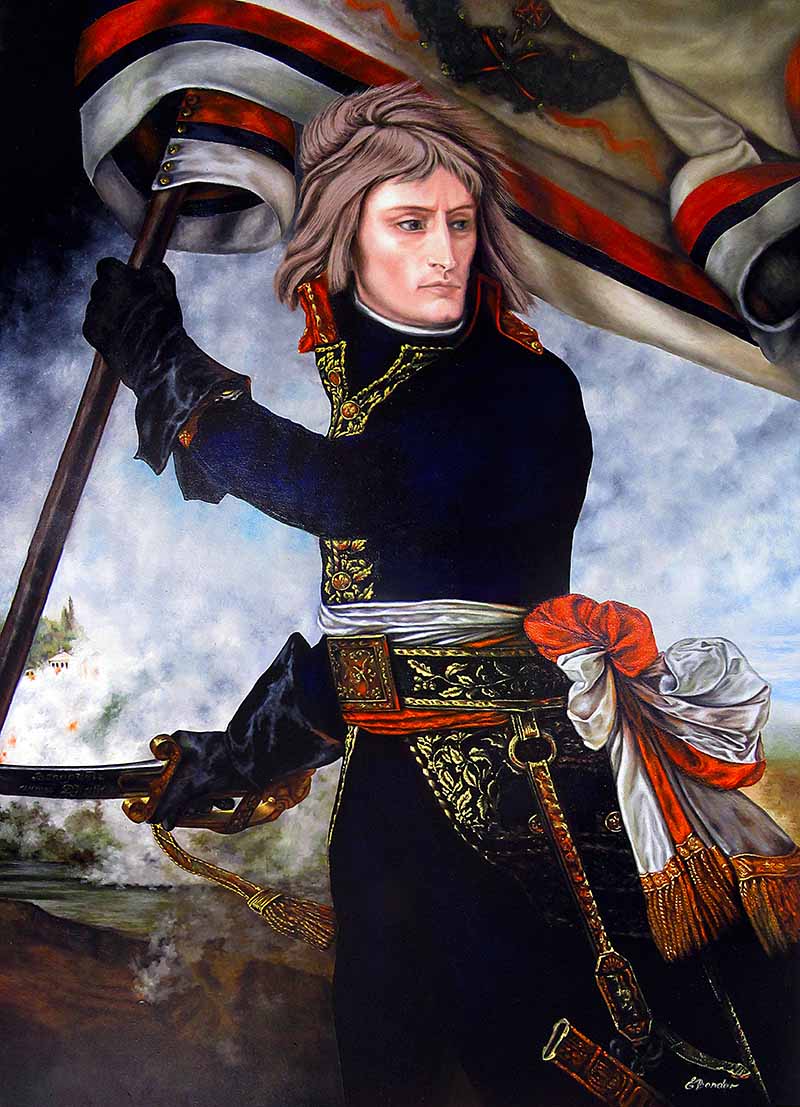 Here is my reproduction of Bonaparte at the Pont d’Arcole. This is a 1796 painting by Antoine-Jean Gros, showing an episode during the Battle of Arcole in November 1796, with General Napoleon Bonaparte leading his troops to storm the bridge.

The painting presents a three-quarter-length image of Bonaparte, holding the flagstaff of the armée d’Italie in his left hand and his sword in his right – on its blade is the inscription Bonaparte, Armée d’Italie.

He is dressed in the dark blue trousers and tunic of a general of the Republic, with a gold-embroidered red collar. Beneath them he wears a white shirt and a black neckscarf. He also wears a gold-fringed tricolor cummerbund and a square-buckled belt bearing his empty scabbard.

The background suggests the smoke of battle, with a few houses in the distance on the left. The land bordering the river is painted in dark tones, with a smoking cannonball still visible.

Painted in Naples in 1796, ‘Bonaparte au Pont d’Arcole’ passed through the collections of Napoleon himself and of Napoleon III before being sequestered in 1870. It was then reacquired by Napoleon III’s wife Eugénie de Montijo in 1871, who eight years later gave it to the Louvre (now inventory number RF271). It passed to the château de Compiègne in 1901, then finally the château de Versailles in 1938, (n° d’inventaire MV 6314).

Contrary to popular belief, at 5’5” tall Bonaparte was just an inch or so below the period’s average adult male height. The legend of his small stature was largely the work of one man: the British cartoonist James Gillray (1756-1815). Gillray’s caricatural depictions of the French general were so popular and influential that at the end of his life Napoleon said that Gillray “did more than all the armies of Europe to bring me down.”

Unlike modern armchair generals, Bonaparte was a leader ready to put his own life at risk and to lead from the front.

‘Bonaparte au Pont d’Arcole’ is a downloadable hi-definition PDF image scanned from my reproduction oil painting. You will receive a 37 x 51 inch PDF image (42 x 56 inches including the border), ideally suited for printing onto canvas. A ‘Museum style’ white border is added to each side of the picture to facilitate mounting the canvas on a stretcher board. 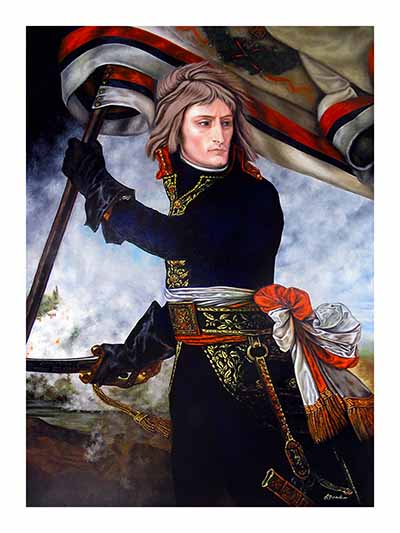 After clicking the Add to Cart button and completing the payment process, you will immediately receive a download link for your picture. Please note that you are purchasing a high-resolution PDF file – not a physical painting. If you prefer a ready-to-mount canvas print you can contact me for postage & prices. 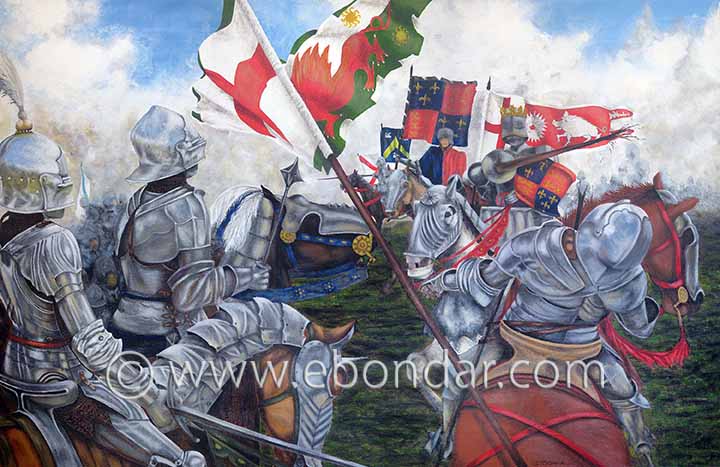 The Third Battle of Ypres, also known as the Battle of Passchendaele, was a campaign of the First World War,… 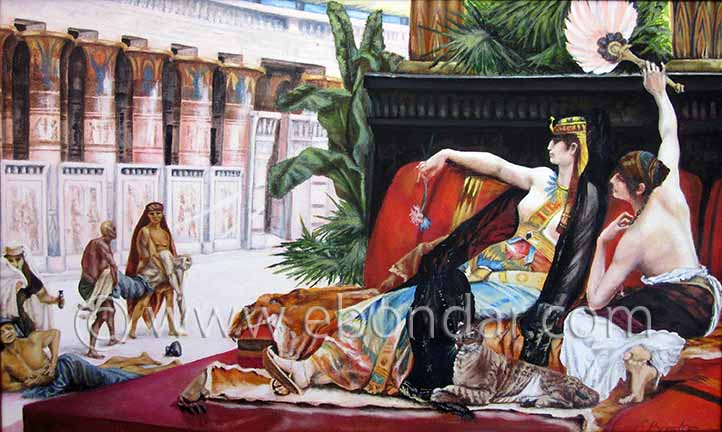 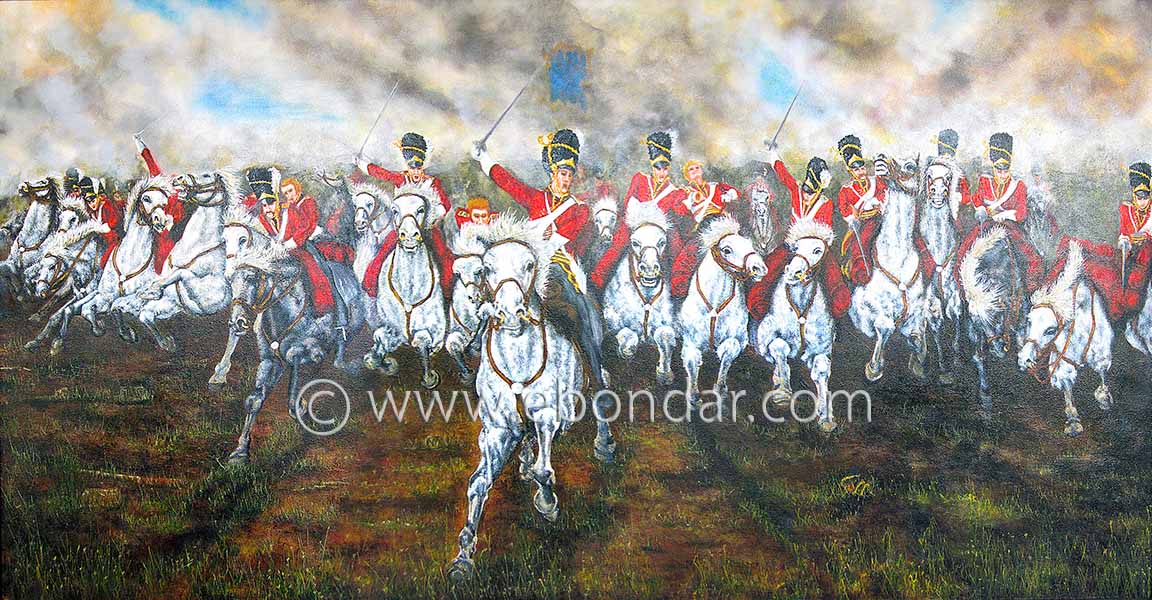